A social media initiative for the 16 Days of Activism against Gendered Violence. 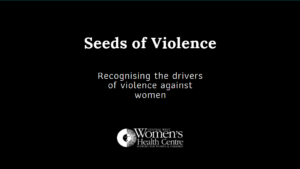 Seeds of Violence is a primary prevention initiative of Central West Women’s Health Centre for the 16 Days of Activism Against Gender-based Violence 2021.

The aim of this initiative is to raise awareness of the things that lead to violent attitudes towards and actions against women.

According to Change the Story¹, factors associated with gender inequality, also known as gendered drivers, are the most consistent predictors of violence against women.

They create environments where violence against women is more likely to be tolerated and even condoned.

These gendered drivers don’t just have a negative impact on Cis* women but also on people of diverse genders who don’t conform to a stereotypical or traditional idea of gender.

They also impact Cis* men, as societal expectations of what a ‘real’ man is supposed to be is limiting and can be damaging to those who don’t conform.

We are all harmed by these attitudes and stereotypes.

Gendered Drivers of Violence Against Women

Sexual harrassement is one form of violence against women.

Justifying, excusing, trivialising, downplaying, or shifting the blame for any type of violence, are all forms of condoning violence against women.

Less action will be taken to support victims and hold perpetrators to account when:

A society that allows violence against women in this way will see more of that type of violence occur.

Levels of violence against women are significantly and consistently higher in societies, communities, and relationships where there are rigid ideas about what is the man’s role and what is the woman’s role.

According to Our Watch, research has shown that men are more likely to be violent toward women if they have traditional or hierarchical views about gender roles.

Rigid ideas about gender roles can lead to:

Sexist or stereotypical ideas of what is masculine and what is feminine can also drive violence against women because:

These rigid and stereotypical ideas of the roles of men and women harm everyone, including men.

When men control decision-making in families and relationships, violence is more common. Where women are allowed more independence or are treated equally this violence is less common. The limits to women’s independence may be at an individual level (such as the husband making all financial decisions for the family) or at a societal level (such as women not having equal access to education).

The impacts these types of attitudes or behaviour have include:

Limiting women’s independence increases their isolation and cuts them off from potential support networks.

Male peer relations (both social and within organisations) can be important supports for men. However, when they are negative and reinforce or condone stereotypical and aggressive forms of masculinity, they can create disrespect of and hostility towards women.

These negative peer relations are associated with higher levels of violence against women because:

Factors that reinforce gendered drivers of violence against women include:

Women in many of these groups may not have the same access to support or may not feel comfortable seeking support due to the multiple forms of adversity that they face.

What You Can Do

To learn more about what you can do when you witness these seeds of violence, visit Our Watch’s Doing Nothing Does Harm page – https://www.doingnothingdoesharm.org.au/

If you are in immediate danger call 000.

– Cis – short for cisgender, means that the gender an individual identifies as is the same as what was presumed at birth. E.g., Someone who was declared male at birth identifies as male as an adult.

Gender is unrelated to someone’s sexuality. An individual can be cisgender and straight, or cisgender and gay, lesbian, bisexual, queer, or another sexuality, just as they could be trans and any sexuality.  For more information on this check out ACON’s TransHub https://www.transhub.org.au/101/cis

¹Change the story: A shared framework for the primary prevention of violence against women and their children in Australia, Our Watch, Melbourne, Australia. https://www.ourwatch.org.au/change-the-story/