A Lifelong Advocate for Equality 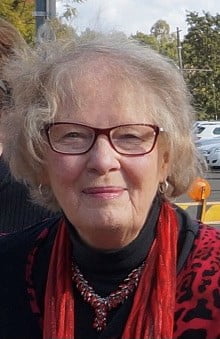 When Margaret Shearer joined the Central West Women’s Health Centre (CWWHC) Board in 2019 she wasn’t new to working collaboratively to support women. In fact, she wasn’t even new to CWWHC.

Born in Sydney and growing up in Epping, Shearer spent her early years like a lot of post-World War Two children, hearing about the horrors of war from family members, friends and from refugees. The cold war, protests against the Vietnam war, and Green Bans in Sydney were all part of her experience.

“The sixties were revolutionary in many ways,” says Shearer. “Music, fashion, art, relationships, women’s rights. The Whitlam government was also revolutionary in its social policies in the early seventies, and Margaret Whitlam was a great influence.”

As a young adult living in Newtown and studying Education, Shearer got involved with the South Sydney Women’s Centre when it started up in the mid-seventies.

“I was pretty involved with things politically and I knew people that were involved,” she says. “I just ended up on the collective because of an interest in women, women’s health and women’s rights. It was a great collective; we had enough funding for a coordinator and that’s it. It was an interesting time.”

During her time there, Shearer witnessed benefits that were previously reserved for widows being expanded, giving a lot of women the opportunity to escape domestic violence relationships with their children for the first time.

One of the many pioneers of the women’s movement, Shearer went on to support and work at the Women’s Resource Centre in Katoomba during the eighties and after some career changes she eventually moved to Bathurst.

During the nineties, while studying psychology, Shearer took the Health Ed. position at CWWHC where she was instrumental in the creation of many programs, including Mothers & Daughters, which still runs (in a slightly different format) at the Centre to this day.

After a couple of years, she left the Centre to concentrate on university. When she finished her psychology degree Shearer returned, this time as Counsellor, a position she held for almost a decade.

“I can never remember if it was eight or nine years,” she says. “I loved the counselling work here (at CWWHC). And towards the end of that I started doing some private psychology work and I gradually moved into the private work.”

Despite a lifelong interest in women and women’s health, Shearer doesn’t call herself a feminist.

“I don’t like labels,” she says. “They can result in stereotyping and oversimplification. Feminism has so many definitions that confine people to boxes, so if I say I’m a feminist, people will interpret that according to their definition.

“I would say that I’m someone who believes that everyone should have equal opportunities in life and not be discriminated against or abused because of sex, race, age, disability, or situation in life. Ideally, feminism calls out discrimination and disadvantage and seeks to redress the imbalance at all levels from grass roots to government.”

Now retired, Shearer is still actively working to help address inequality through her involvement in the local Refugee Support group, where she tutors refugee children whose parents don’t speak English.

She also has a strong environmental streak and works with Greening Bathurst, organising a sustainable gardening group.

From her early years as a politically involved young woman to a retiree, helping to bring about change from the grass roots up, Shearer is a fantastic support for CWWHC and her experience and understanding of the importance of these types of organisations is invaluable and greatly appreciated.